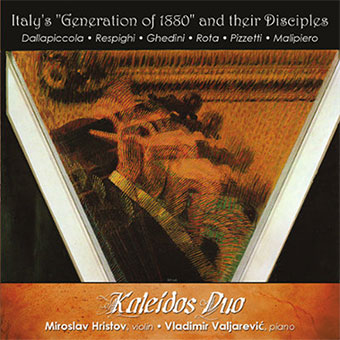 Italy's "Generation of 1880" and their Disciples

"...Respighi's later B minor Sonata also turns up in a fine recital by the Kaleidos Duo (violinist Miroslav Hristov and pianist Vladimir Valjarevic) that usefully collects a number of pieces together under the title 'Italy's "Generation of 1880" and Their Disciples', a reference to the group of Italian composers whose determinedly tonal outlook bucked contemporary trends (Romeo Records 7304). This gifted duo's urgently spontaneous reading, deeply felt and affectionately phrased, is the emotional nerve centre of a programme that also includes Dallapiccola's neo-Baroque Tartiniana seconda (an arresting 1956 rethink of Tartini's A minor Sonata), Ghedini's dreamily archaic Bizzaria and Rota's Improvviso, a lively take on Prokofiev (the booklet note is correct in asserting it is nominally based in C as opposed to the listings' D minor).  Rounding things off in style are Pizzetti's strikingly inventive Tre canti and two haunting cantos byMalipiero.

"The Kaleidos Duo's recital of music, by Italian composers who hadn't fully embraced what now again seem like the experimental techniques of the Second Viennese School, begins with Luigi Dallapiccola's Tartiniana Seconda. It is a four-movement work ("Pastorale," Tempo di Bourree, Presto, and "Variazioni"), based in part, according to the booklet notes, on Giuseppe Tartini's Sonata in A Minor, and quoting from it—but Dallapiccola also quotes almost an entire movement from Tartini's Solo Sonata No. 25 in D Minor. In fact, in the first movement, many of Tartini's characteristic figures appear in the violin, though the piano plays a more active part. Violinist Miroslav Hristov sharply defines the violin part and pianist Vladimir Valjarević plays with sympathy and discretion the piano part, rising to especial prominence (almost as fully in partnership with the violin as in Szymanowski's piano accompaniments to three of Paganini's caprices) in the last movement, which ranges far and wide, both harmonically and melodically. Ottorino Respighi himself played the violin and wrote several concertos for the instrument, as well as two sonatas. Jascha Heifetz used to play the later sonata, and it seems to be creeping into the repertoire. Hristov and Valjarević play its soaring first movement with Romantic ardor, Hristov varying his vibrato to produce a most affecting sense of nostalgia. That sense continues into the slow movement, Hristov seeming almost to stretch his tone in the upper registers to reach the climaxes. Valjarević begins the passacaglia commandingly, and Hristov joins him in the same spirit through the first declamatory movements; they return to that manner at the end to bring the recital to a powerful conclusion. With performances like this one (a dynamo compared to the version by Lea and Esther Birringer on Gema 8553432, and the arguably weightier than the estimable one by Tasmin Waley-Cohen and Huw Watkins on Signum 376, all three of which performances I've recently reviewed), the sonata may make even further inroads among listeners as well as among violinists. Hristov captures the haunting atmosphere of Georgio Ghedini's evocative miniature Bizzaria before setting out on Nino Rota's more extroverted and virtuosic Improvisso, which resembles now a heavy-handed, double-stopped tarantella and now one of the composer's haunting movie scores. According to the notes, Ildebrando Pizzetti wrote the three songs included on the program for cello and piano, revising them for violin and piano in the same year. Less straightforward than, though as loamy as, Respighi's pieces, or even Ghedini's, they sing vocally in the duo's readings (as in the opening of the second), though they remain instrumental in idiom. Despite his razor-sharp technique, Hristov doesn't focus principally on the music's pyrotechnical aspects, but has also cultivated a melodic style adapted to intimate expression. The third song, "Appassionato," grows more agitated; and the duo returns to the more strenuous manner they adopted in the first. The program comes to a close with two pieces that composer Gian Francesco Malipiero designated canti. Hristov plays the first in the manner he brought to the slow movement of Respighi's Sonata; he and Valjarević begin the second with the quietly suggestive mystery they explored in Ghedini's piece. In all, it's a deeply affecting recital, very highly recommended for its sharply etched readings of Dallapiccola's Tartiniana, its warmly surging one of Respighi's Sonata (perhaps especially for that), and its sympathetic way with the shorter pieces, as well as for its clean and vivid recorded sound."

"This is an excellent disc that will introduce you not only to some interesting Italian chamber music of the 20th century, but also to the excellent Kaleidos Duo."