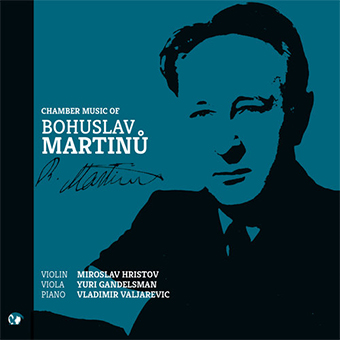 "The chamber music of Bohuslav Martinů is a continual source of joy, nowhere more so than in these tender, affectionate performances. The actual disc design may not be too inviting, but Hristov, Gandelsman and Valjarevic give splendidly focused performances of these three works.
The Third Violin Sonata of 1944 is an extended work, by some way the longest of Martinů’s three violin sonatas. The superb tone of Hristov and the pointed playing of Valjarevic find an almost dancing quality to the musical surface of the first movement, the drama emerging naturally from that. The slow movement, an Adagio, has moments of magical fantasy where the music seems to find its way through gravity to another, more rarefied, space; this feeling is beautifully achieved by the present performers. Hristov’s control at the close of the Adagio is magnificent; it leads to a dancing, refreshing Scherzo. Hristov digs in nicely (the recording captures that aspect well). No doubting the dolce element of Hristov’s tone in the long, Lento melody that opens the finale, a movement that gains gradually in urgency as it progresses.

Fredell Lack and Timothy Hester on Centaur Records neatly place all three violin sonatas on one disc along with the Sonata for Two Violins and Piano, H 213 (reviewed in Fanfare 20:2 by David K. Nelson). Their performance is more urgent in the first movement of the Third Violin Sonata, with more emphasis on the dissonances. Lack and Hester’s second movement is considerably faster; it flows in a complementary way, perhaps, to the highlighted enigma of Hristov and Valjarevic; the Centaur Scherzo has just that touch more spirit to it, however. Both performances track the trajectory of the finale well.

The Viola Sonata, H 355 of 1955 was written in Manhattan. Composed for violist Lillian Fuchs, this is a work of great refinement. Russian-born Yuri Gandelsman, Professor of Viola at Michigan State University College of Music and a former pupil of Valentin Berlinsky, is in superb form. His fine sense of line in the first movement (Poco andante) gives way to a light sense of play for the opening of the finale. Clouds settle over this movement, too, though; the intensity here is remarkable. While there is no denying the Bohemian slant of the movement, it is the impression of sheer concentration that is left after this performance. The recording is fairly close, which adds to the slightly claustrophobic impression. A remarkable account, and one hopes that it might lead listeners towards a disc that features four works that feature the viola on BIS. The performance of the Viola Sonata there is by Maxim Rysanov and Katya Apekisheva. Alternatively, one could move in another direction, that of a disc entitled Czech Viola Sonatas: Kristina Fialová and Igor Ardašev furnish us with just that on Supraphon, coupling the present piece with viola sonatas by Husa, Kalabis and Feld. Fialová’s performance of the Martinů is even more impassioned than Gandelsman’s in the first movement; honors are evenly awarded in the finale. Whichever performance one chooses, there is no denying the power of this piece. If you don’t know it, perhaps it is time you did.

Finally, the 1947 Duo for violin and viola, “Three Madrigals,” another work composed for Lillian Fuchs, this time in conjuction with her brother, Joseph Fuchs. The subtitle reflects the composer’s love of the Renaissance madrigal, and the sense of freedom of the polyphony in this work. The prime accolade of Hristov and Gandelsman’s performance is that of sprightly joy in the folkish musical material. The intriguing, exploratory central movement, with its almost experimental way with trills, comes across as particularly innovative here before the partying of the finale takes over. The connection between Hristov and Gandelsman in this last movement is particularly impressive as they play cat-and-mouse with each other.

A notable alternative to this performance of the Duo is that of Philip Setzer and Lawrence Dutton of the Emerson String Quartet on DG. “Notable” because Lawrence Dutton was himself taught by the work’s dedicatee, Lillian Fuchs. Beware, though, the stereo separation on the close DG recording is stark indeed; some might say uncomfortably so. The performances themselves are technically impeccable, although there is more of an identifiably folkish swing to the Hristov/Gandelsman performance. The trills of the second movement in Setzer/Dutton are considerably less atmospheric also, more like the annoying buzzing of insects in fact, and while there is a definite cleanliness to Setzer/Dutton throughout, it is Hristov and Gandelsman that nail the flavour of the piece.

In short, Blue Griffin has produced a fabulous disc, one absolutely worthy of investigation. Worthwhile mentioning the somewhat nondescript disc design again in this context, as this would be an easy CD to overlook while browsing. If anyone browses in record shops anymore, that is.